Have you read the infamous article that claimed beards are unsanitary and likely contain vast amounts of ‘poop-particles’? Yes, that really happened. And yes, it has obviously been debunked. But it sure attracted a lot of attention!

Here at Red Lemon, we are huge Beard supporters. My husband has a sweet one, it’s kinda red and totally awesome! No two beards are alike, and we just love them all…..especially soft and clean beards. So while we’re on this subject, let’s talk about some great ways to keep your beard clean and looking shmexy!

Jason in the shower.

When it came to beard care, my husband had always done the typical thing. He washed his beard, in the shower, with regular shampoo and conditioner. (Ironically, this was the only shampoo he used, as he keeps a shaved head!). For him, it seemed to do the job just fine; so when I mentioned the idea of making a shampoo bar specifically for beards, he was resistant to the notion. “It’s a neat idea, hun. But I just don’t think it would be necessary.” Well, we ended up striking a deal: if I made the product, he would try it. I knew he would give me an honest opinion about it, because he is always brutally honest when I ask his opinion. For example, when I make new dishes for dinner, I (used to) ask him how he liked it. On 2 separate occasions, Jason has told me that his mother makes it better. See? Brutally. Honest.  (And nearly murdered. #sorrynotsorry)

But in any case, I love him. And I got to work formulating a Beard Shampoo Bar. It is a tricky product, because it not only needs to wash the hair of the beard, but also address the skin underneath.  Shampoos and conditioners can treat the hair, but don’t do much for the skin. And face soaps can wash the skin, but tend to leave a residue on the beard. So, what’s a girl to do?

What’cha got under the hood?

Well, I started with a shampoo bar, a hybrid between soap and shampoo. I made it a high lather recipe, for extra sudsy washing. I added in golden Jojoba oil to nourish the face and especially the beard. Beard hair differs from head hair, as it doesn’t produce much natural sebum and can easily become dry and brittle. I hate to see a good beard turn frizzy, so I needed to address this. Golden Jojoba oil is a very close substitute for natural sebum, and can replenish moisture well without feeling greasy, so this was a no-brainer. Next, I added in Tea Tree oil for deep cleaning-toning, and Rosemary oil for hair health and to encourage growth.   Lastly, I dropped in some Bergamot and Thyme to make this shampoo bar one of the most heavenly smelling things on the planet. 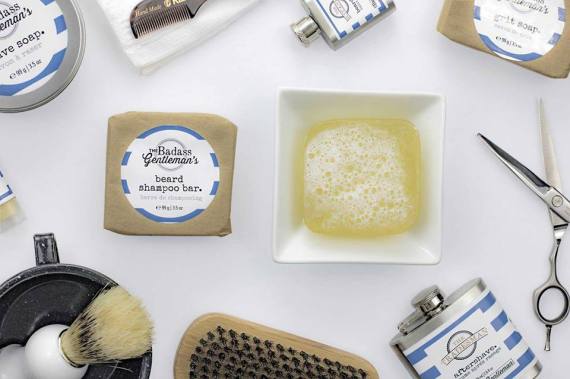 The Proof is in the Pudding

Nervous and hesitant, I presented Jason with my new creation. I sat outside the bathroom, waiting for him to come out. He had only gotten 1 minute into washing (at the sink), when he came out to see me. He had worked up some serious lather and his eyes were wide open. The first thing he said was, “Look at this lather! It’s awesome. And the smell! You hit it RIGHT on the head. I love it!”

When he finished up, he applied some beard oil to condition and brushed it through with his boar-hair beard brush. I was giggling, because for the rest of the evening he was fondling his beard and kept inviting me to feel it too. He was saying things like, “Isn’t it so soft?!”, “Isn’t it nice?!”, and “My skin feels awesome!”  LOL!

I don’t think I’ve ever seen him so stoked about something that wasn’t food or an electronic gadget. And I was giddy, to say the least.

Well, I noticed in the next week that Jason would find any excuse to wash his beard. He wouldn’t wait until he had a shower; he would just wash his beard in the bathroom sink whenever he needed a pick me up. I cannot tell you how many times I was in the kitchen making dinner, and I turned around to this giant man with a crazy, sudsy beard saying, “Look at how much lather I got. Heh heh heh. This smells so good.” And then watched him saunter back off to the bathroom as I slowly lowered my karate hands and tried to re-regulate my heartbeat.

Recently, Jason took a new bar, cut it up into smaller pieces, and handed it out to his dad, his brother, and some of his friends. Apparently, I have taken this skeptic of a man and won him over to ‘Team Beard Shampoo Bar’. He is converted and wants to share the good-facial-hair news! LOL Which makes me so totally excited to now be able offer this same product in our shop. If you have a beard and are curious about our shampoo bar, try it! See what you think.  I hope you like it as much as Jason does. 🙂  http://www.red-lemon.ca/

And I hope it makes all of your Beardly dreams come true.

PS. Don’t forget to check out one of our premium beard oils. When used post-wash, it conditions and protects your beard, making it soft and manageable.

2 thoughts on “Your Beard does not have Poop in it.”